"A skilled fighter and natural leader, Trench is the heart of the Rogue Company team."
— In-game Description

Samuel "Trench" Joseph is a Rogue in Rogue Company.

At the heart of the Rogue Company team, Trench as personally recruited by The Director to help guide he group's moral compass. A Natural Leader and cool under pressure, Trench is well respected around the world.

Trench is a Defender, a Rogue Company member that focuses on securing objective locations and slowing the enemy advance. He wields the ability to deploy a barbed wire trap. Enemies caught in the trap will have their movement slowed. He can also carry extra gadgets.

Trench's job is to block as many paths as he can from the enemy team and slow or prevent them from getting to the objective. 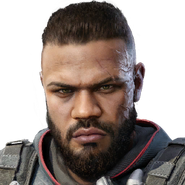