"Once an infamous enforcer in the Japanese underworld, Talon has switched sides and now works for Rogue Company. Talon’s real name is Jimmy Zhang."
— In-game Description

Talon is a Rogue featured in Rogue Company.

Talon is a Intel Rogue, a Rogue Company member that helps his team gain information on enemy positions to turn engagements in their favor. He utilizes a radar dart, which, when thrown, attaches to surfaces and will detect enemies that are nearby. His passive ability, Mag Gloves, allows Talon to picks items from a distance.

Talon is a character that would much rather stay in the shadows than to be revealed to the enemy. His play style prefers him to stay hidden and assist his team by revealing enemy locations, or even picking up items without being seen by others. 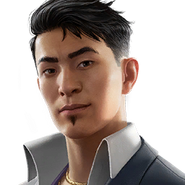 Add a photo to this gallery

Retrieved from "https://roguecompany.fandom.com/wiki/Talon?oldid=5439"
Community content is available under CC-BY-SA unless otherwise noted.