"A short fuse in a leather jacket, Switchblade cuts a fiery swath through those who oppose her."
— In-game description

Switchblade is a playable Rogue featured in Rogue Company.

Switchblade is a Breacher, a Rogue Company member that specializes in pushing through defenses or making an opening for their team to advance. Switchblade wields a Napalm Launcher called the Chaos Launcher and gain an increase in movement speed after she uses her ability or a gadget.

From a young age, Switchblade’s been on the run and doesn’t know why. Everyone she gets close to ends up dead. Signing up with Rogue Company is a temporary thing as the Director promised her if she joined, the team would find out who’s made her life a living hell. Switchblade doesn’t believe in promises, but it feels nice to pretend that she does.

The MLX Mark 4 is the third most damaging assault rifle, but has the furthest range and the best handling. It is the best assault rifle to use from a distance, and the handling provides great benefit to that. The 24S SMG is a basic SMG, as it does not exceed other SMGs nor does it fall short.

The Spitfire pistol has the fastest rate of fire (due to it being a rapid firing pistol).

Switchblade's Chaos Launcher fires in a single direction and, on impact, deals damage and will burst into three areas of lingering fire. It deals 75 damage on impact and each hit of fire will deal 20 damage. 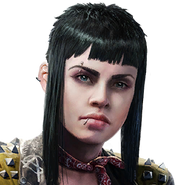