"Discharged from the Army after losing her arm in combat, Scorch became a Rogue to get back in the fight."
— In-game Description

Scorch is a Rogue in Rogue Company.

Born in Brooklyn, New York, Kayla "Scorch" Johnson served in the United States military for 8 years after joining at the age of 19 years old. Kayla was known as one of their most lethal soldiers, but while executing a deadly mission, Kayla would wound up losing her arm due to being attacked by a flamethrower. The military discharged her and it wasn't long before Kayla missed the action. Soon later, she came across Rogue Company via "The Arms Dealer." Kayla created her own "flamethrower" and was accepted into Rogue Company as one of their most lethal fighters.

Scorch is confident, enthusiastic, fearless, and straightforward. She's always ready to charge into the mission when required to and eager to engage against the enemy to show them who's boss. Her confidence and fearlessness is vast, as when she must get the job done by herself, she claims that she can "really cut loose". Whatever Scorch says, she does not exaggerate or complicate her words.

Scorch is a Duelist, a Rogue Company member that wins combat engagements and forces trades with the enemy team. She can set enemies on fire and deal additional damage. She is also immune to fire.

Scorch has the potential to take down an entire team by herself. She can be very regretful to come across, as her damage output may have enemies think twice about being in her line of sight. 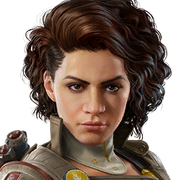