"Once part of the elite Pararescue unit, Saint joined Rogue Company to save lives and help those in need."
— In-game Description

Saint is a playable Rogue in Rogue Company.

Saint is a Support Rogue, a Rogue Company member who provides combat assistance to his teammates. Saint can send a revive drone to a downed team member to revive them and whenever he revives a teammate, their health and his heals a significant amount.

Saint grew up fixing cars in Detroit before graduating to fixing people in the Air Force. Top of his class at pararescue school, Saint had already seen action around the world before joining Rogue Company. 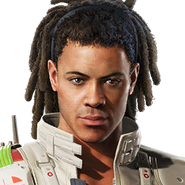