"An underground street racing champion, Ronin's always up for some action."
— In-game Description

Ronin is a playable Rogue featured in Rogue Company.

Ronin is a Duelist, a Rogue Company member that wins combat engagements and forces trades with the enemy team. She carries a ballistic knife that can be thrown or be used as a melee weapon. Her passive ability allows her to be hidden from mini maps on the enemy team. Ronin is the most tactical Rogue and can be very creative with her arsenal. Ronin is good from close to mid range and can be difficult to play against when she understands the playing field.

For years, Ronin dominated the Tokyo Underground Street Racing scene, rebelling from the control of her wealthy family. Now she makes her mark as one of Rogue Company's most famous operators.

Ronin is competitive, energetic, friendly, and can be teasing at times. 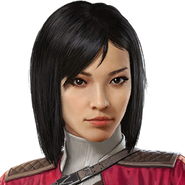