"Phantom was a genetic experiment, trained from birth to be an unparalleled sniper and assassin."
— In-game Description

Phantom is a Rogue featured in the game Rogue Company.

Phantom is a Sniper, a Rogue Company member that excels at dealing substantial damage in long range combat. Her Nano Smoke ability reveal enemies that are in the area of the smoke. Her passive ability delays an enemy's health regeneration when they are damaged by a firearm.

The subject of an illegal blacksite genetics program, Phantom was trained from birth to be the perfect assassin. Her skills sold to the highest bidder. Rescued by Trench, she broke free from her mental conditioning. For the first time, she is learning about the world, who she truly is, and making her own choices about who she wants to be become.

Phantom is a self-centered, confident, selfish, and cocky person. She tends to show an immense amount of pride in her talent of shooting people and, implied by her quotes, enjoys it. Whenever she is in trouble, she wants her teammates to be around to help, but if her they create a fault for themselves on the battlefield, Phantom does not want to be bothered with it. Although, when Phantom is the one to help her teammates, she lets them know that she's only helping them because of the mission, not because she likes them. She taunts the enemy very often and when left to complete the mission by herself, becomes very bold and confident that she can win.

The LR15 Fullbody is the most second damaging weapon in the game dealing 70 damage to the body and 140 to the head. It has a slower fire rate than the Tyr, but it has longer range, better handling and a larger mag size. The Nightshade is the fastest firing assault rifle along with the second best handling but does the second lowest damage and has the least range. The P12K is tied in second with the Executioner for having the longest range, has the third best handling and has the fastest reload time of any pistol at base tier.

The Nano Smoke is set to be used for intel, but enemies will most likely escape from the smoke just as they are revealed. Phantom can also use this smoke to cover an objective to keep enemies away because they do not want to risk being revealed or use it as cover to help teammates get a revive. When Phantom damages an enemy, their health regeneration is delayed. This is will allow Phantom or a teammate to finish them off easily because they won't have their health back in time to save them.

Sometimes, an enemy won't let themselves be shown to Phantom. The Grenade is a back up tool for Phantom when an enemy keeps themselves tucked away behind cover or a wall. Even without the Nano Smoke, Phantom can still reveal enemies another way. The Sticky Sensor is another tool that Phantom has to keep notice of where enemies are so that she can line up the perfect headshot or to keep watch of certain areas.

Phantom's key perks are Tracker Rounds, Life Drain, and Nimble Hands. Tracker Rounds gives Phantom the vision to see where enemies are when she shoots them, so she can plan certain attacks based on their position. Life Drain is a very important perk for Phantom because as Sniper, she is required to stay far away from the enemies. If they happen to get close to her and she survives, she will gain the health back that she never planned to lose in the first place. Nimble Hands will grant Phantom the speed to reload her clip quicker so that she can continue to fire at the enemy.

Phantom can be played on attack or on defense and can stop enemies with ease (if played extremely well). She has multiple ways to have intel on the enemy, even going as far as to keep watch of the flanks or incoming objective routes.

Phantom will fail in close quarters combat (mostly against Duelist) most of the time and enemies always escape the Nano Smoke as quickly as possible.

As a sniper, Phantom must keep her distance from enemies and assist her teammates from afar or she can engage the enemy like others using the Nightshade. Phantom also has various options in her loadout that allows her to be somewhat similar to an Intel Rogue, such as the Sticky Sensor, Nano Smoke and Tracker Rounds. Because of this, Phantom wants to keep knowledge of enemy locations and wants to decrease their survivability chances with her passive. 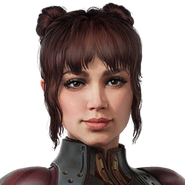