Lancer is a Rogue featured in Rogue Company.

Lancer is a Duelist, a Rogue Company member that win combat engagements and force trades with the enemy team. Her unique ability grants a temporary boost in movement speed and silences her footsteps. Her passive ability allows her to automatically reload her weapon during a dodge-roll.

A talented free runner turned Olympian, Lancer capitalized on her success, cutting multiple deals with apparel companies and actively engaging with her fans on Social Media. A prominent and visible member of Rogue Company, Lancer loves the spotlight and often uses the platform it provides to amplify the voices of her followers and those in need.

Lancer is effective at close range engagements. The 24S SMG is the third most damaging SMG, but has the lowest mag size of any SMG even when upgraded (excluding if the LMP-X was not upgraded). The Striker 8x10 is the fastest firing shotgun and has the largest magazine size, but does the lowest damage, has the lowest range, and has the longest reload time. The Spitfire pistol has the fastest rate of fire (due to it being a rapid firing pistol) and deals the least damage and travels the least distance compared to other pistols.

Lancer can sprint without making noise and move as quickly as possible without being detected. She can reach the other side of the map and flank distracted enemies, but Lancer's ability will deactivate when she fires her weapon. Elusive is a very useful passive ability because in a fight, while the enemy may have to reload, Lancer will be able to finish them off because her weapon was reloaded quickly.

The Smoke Grenade can be used to block enemy vision, which can give Lancer the opportunity to flank the enemy while they are distracted with the smoke. The Semtex Grenade is given to Lancer for its quick explosion time, pairing well with her to swiftly strike against the enemy.

Lancer's key perks are Life Drain, Tracker Rounds, and Stalker. Life Drain gives Lancer health back, so when she engages into another fight, she'll have a sufficient amount of health to engage with. Tracker Rounds gives Lancer the vision to see where enemies are when she shoots them, so she can plan certain attacks based on their position. Stalker allows Lancer to move quicker when aiming down sights so that she'll be a harder target to hit.

Lancer can always overwhelm an enemy in a fight by having her clip instantly reloaded while the enemy must reload theirs. They'll be low on ammunition, which gives Lancer the opportunity to attack them at their lowest position. Lancer can also gain health back and gain intel on the enemy, so she has multiple ways to keep on engaging the enemy. She also can't be revealed when using her ability, so this will allow her to perform many successful surprise attacks.

Lancer can easily be out-gunned from long ranged weapons and does not have other ways of survivability aside from Life Drain.

Lancer is most likely the Rogue that always starts a fight first. She is quick to get into battle and but can also become the "silent but deadly" Rogue. When Lancer gets into one on one engagements, she will win most fights. Lancer is the quick paced Duelist, as once she begins her momentum, Lancer may take an entire team on her own. 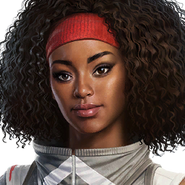