"Kestrel was doing the work of a Rogue since before Rogue Company even existed."
— In-game Description

Kestrel is a Rogue in Rogue Company.

Kestrel is a Duelist, a Rogue Company member that wins combat engagements and forces trades with the enemy team. Kestrel utilizes high-tech mini-drones to launch an explosive rocket barrage at enemies. Upon downing an enemy, Kestrel will gain an extra $500.

Ten years ago, Kestrel started fighting to make the world a better place, and looking good while doing it. She was a founding member of Rogue Company, but retired and invested her take into business opportunities, most notably on one of the largest activewear clothing brands in South Asia, making her one of the richest women in the world.

Kestrel's drones can fly as far as it will and will only stop until it hits a surface. The explosion radius is 5 meters and can even damage enemies behind certain walls. Gaining an extra $1000 per down allows Kestrel to gain more utility, upgrades and perks faster than other Rogues. In future rounds, Kestrel will have the upper hand.

Kestrel uses the Bounce Grenade to clear out enemies that are around corners or behind walls. Along with her drones, Kestrel can achieve many surprise attacks and induce enemies to always beware of when she will make a move. For emergency moments, Kestrel has access to the Adrenaline Shot to quickly get her health back up to have the higher hand in a fight or to make a hasty retreat from an overwhelming fight.

Kestrel's key perks are Resupply, Replenish and Helping Hand. Resupply gives Kestrel her gadgets back so that she can continue to deplete the enemy team or to always have some way to succeed or retreat from a fight. Replenish gives Kestrel her entire clip back, so when she engages into another fight, she'll have all of her ammo to engage with. Helping Hand will apply Kestrel with the assist of being able to get teammates back into the fight quicker.

Kestrel can always have some sort of way to attack the enemy without throwing herself into the open and can keep herself alive. Having more utility and upgrades will keep Kestrel a few steps ahead of her enemies. She can also keep something in her arsenal to have an advantage over her enemies.

Enemies that play from far distances (Such as Phantom, Fixer or Talon) will force Kestrel to not use her drones. Because they are far away, not only will they see the drones coming easily, but they will easily get out of the way, causing Kestrel to waste her ability.

Kestrel has many different tools to attack enemies without ultimately exposing her position. Forcing trades with the enemy, Kestrel will have back up, even if it isn't her teammates. Her drones can take care of business while Kestrel deals with other enemies and she can down multiple enemies at the same time, removing problems before anyone sees it coming. 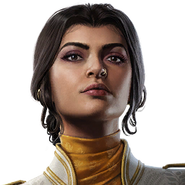