"One of the worlds most notorious hackers, Gl1tch uses his skill in technology to win battles."
— In-game Description.

Gl1tch is a Rogue featured in Rogue Company.

Gl1tch is a Breacher, a Rogue Company member that specializes in pushing through defenses or making an opening for their team to advance. Gl1tch has a unique ability that can detect nearby enemy signals and infiltrate their systems. His passive ability, Intuition, lets him detect enemy equipment, even through walls.

Gl1tch's job is to stop enemies from setting up traps and defenses, giving his team a chance to deal with less pressure. 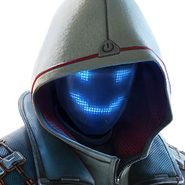 Character model
Add a photo to this gallery

October 14, 2020: Sixth Sense has been removed from the game and Gl1tch has now received a different perk, Headstrong. LMP-X range has increased from 12.5 to 13.

Retrieved from "https://roguecompany.fandom.com/wiki/Gl1tch?oldid=4015"
Community content is available under CC-BY-SA unless otherwise noted.