"Dima's most known for his explosive personality... and liberal use of explosives."
— In-game Description

Dima is a playable Rogue featured in Rogue Company.

Dima is a breacher, a Rogue Company member that specializes in pushing through defenses or making an opening for his team to advance. Dima is equipped with a cluster grenade launcher known as the MIRV Launcher and he can reveal enemies when they are hit with explosives.

A singular force of destruction, Dima strikes fear into a world that sees him as crazy and unhinged. Few choose to face off against the masked Russian for long, as his enemies have a tendency to end up with very little left of them to identify.

The KA30 is a well balanced assault rifle with decent range, ammo, damage, accuracy, etc. The Mamba is the highest damaging DMR. It has the fastest fire rate and the largest magazine, but this is because it is a burst assault rifle. It has the shortest range, but it is still effective at long range. Dima is great at mid range offense and can down enemies quickly if he does well.

Dima's pistol is the Executioner, which does 32 body damage. It is tied in second with the P12K for having the longest range. It behaves much similarly to a DMR. The Executioner has the worst handling and the longest reload time of any other pistol. It has the second slowest fire rate, so its damage and range are the best thing about this weapon.

Dima's MIRV Launcher bursts into three smaller grenades that spreads out, covering distance, and have huge explosion radiuses. They deal 90 damage each, so all together, they deal 270 damage. As a breacher, Dima uses this tool to clear out enemies so his team can continue to push forward to the objective. Dima reveals enemies whenever he hits them with an explosive. This pairs well with the MIRV Launcher because any hit by the MIRV grenades will either be very low on health or with be downed.

Dima has the Grenade and the EMP grenade. Dima uses the Grenade to get rid of enemies, but if that isn't the case, they will take damage and be revealed, allowing for Dima or a teammate to finish them off. The EMP is a useful breaching tool to stop enemies from being able to use their abilities and gadgets to survive or escape, such as Quick and Quiet, Rage, and/or even the Adrenaline Shot.

Dima's key perks are Life Drain, Resupply, and Bounce Back. Life Drain gives Dima health back, so when he engages into another fight, he'll have a sufficient amount of health to engage with. Resupply gives Dima his gadgets back, so when he doesn't have his MIRV Launcher to use, he'll have something to fight enemies with. Bounce Back will grant Dima his health back faster than what would be given to him at the normal rate.

Dima's arsenal gives him the power to control others or to simply obliterate them. He's one of the privileged Rogues that has two perks that supplies with with increased survivability. Dima has the power to change the enemies' plans and can refill his arsenal to continue pressuring the enemy.

Dima may fail in close quarters combat against SMGs and shotguns. Rogues that have Tenacity will survive Dima's explosive attacks and Rogues that have Cloaked will shorten the reveal time against Dima's passive.

Dima is a very forceful Rogue, as he can easily make a difference in a fight. He can use his grenade launcher for different purposes, which will throw his enemies off guard. Dima must remove enemies from the playing field to provide a beneficial outcome for his team's next fight. 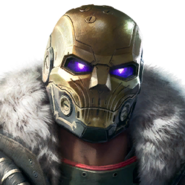