"A former Texas lawman, Dallas is widely regarded as one of the best trackers in the world."
— In-game Description

Dallas is an Intel Rogue, a Rogue Company member that helps his team gain information on enemy positions to turn engagements in their favour. Dallas can reveal an enemy using the Target Finder ability and can recharge it upon downing one.

A former Texas Ranger, Dallas has a reputation as one of the best trackers on the world, always keeping one step ahead of his targets.

Dallas shows to be someone who is "all business", insulting, dependable, has a sense of pride that displays high self-esteem, and friendly. While preparing to start a mission, Dallas will acknowledge that he and his team will get paid, implying that they must get to business and get what's due to them. He also lets his allies know that they can "hang back", and that he'll get the job done. While on the mission, Dallas will insult his enemies, at times calling them slow, and he'll even compliment himself and show pride in his accomplishments. But even so, Dallas is a friendly person, as when Dallas revives an ally, he'll call them "buddy". Dallas also calls enemies buddy, but, he may be being sarcastic.

Dallas uses weapons that sets him apart from enemies. Fighting from a distance, Dallas uses the Riptide and the Devotion.

The Devotion is the most damaging DMR along with the best handling and furthest range. But it has the lowest mag size, slowest fire rate and the longest reload time.

Dallas can snap his finger, revealing the closest enemy (to him) for a short duration. No matter where they are on the map, they will be revealed, even if they are behind a wall, in a building, etc. Dallas' passive will grant him his ability back when he downs an enemy, allowing him to hunt down the next enemy.

Dallas carries an Incendiary grenade and an EMP grenade. The Incendiary grenade is used for area denial or to flush enemies out of cover. If a revealed enemy is behind cover, Dallas can throw it there and force that enemy to retreat or to fight him. If they making an effort to reach a certain area, Dallas can block off that area to restrict them from entering. Dallas can throw the EMP near an enemy that is revealed so that they won't bother to engage even further.

Dallas' key perks are Headstrong, Replenish, and Bounce Back. Headstrong gives armor to Dallas, allowing him to take more damage so that he may still be alive after or during certain fights. Replenish gives Dallas his entire clip back, so when he engages into another fight, he'll have all of his ammo to engage with. Bounce Back will grant Dallas his health back faster than what would be given to him at the normal rate.

Dallas' weapons are stronger than other weapons in their categories and Dallas' ability will always find the nearest person, no matter what. His has one gadget that is excellent for defence (Incendiary) and another gadget that is really good for attack (EMP).

Dallas may fail in close quarters combat against SMGs and shotguns. His ability only lasts for 3 seconds, which may not be satisfying if that enemy is across the map. Enemies can counter this if they have the Cloaked perk equipped, which will have the reveal last for 1 second.

Dallas plays the "hunter" role, generally when he's on attack. He follows a high risk, high reward or low reward, depending on both teams course of actions. Dallas must discover enemy locations or where they are going so that they will have nowhere to hide. With his very damaging weapons and Target Finder ability, Dallas can be the brains and the brawn of the team. Though, if skilled enough, downing enemies back to back successfully will allow Dallas to constantly reveal other enemies to ensure victory against the opposing team. 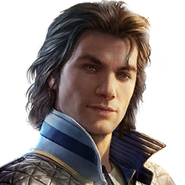