"A mastermind of squad-based tactics, Dahlia now brings her expertise to Rogue Company as a fireteam leader."
— In-game Description

Dahlia is Support Rogue, a Rogue Company member that provides combat assistance to her teammates. Dahlia can link with one of her squad members to revive them from far away if they go down. She can also use that linked member's passive ability during the round.

An elite soldier of the Marines, Dahlia quickly climbed the ranks for her unique leadership and only went as far as to be Second Lieutenant Dahlia. She always kept her squad intact and kept the upper hand when in combat. Suddenly, Dahlia asked to leave Marines to join Rogue Company. It was decided and she immediately impressed The Director, which made her decide that Dahlia should be set as the leaders in her squads.

Dahlia leadership come along with with other personalities, most notably dutiful, perceptive, demanding, and informative ones. Dahlia always reminds her teammates of their duties and the things that comes first. She is always perceptive, knowing what methods to plan out, when the enemy is defeated and finding alternatives when something doesn't go according to plan. Dahlia is often very demanding whenever she links with someone or telling her teammates to revive her when she is down. She informs her teammates whenever the hostiles are eliminated and when they can continue the mission. Dahlia never lacks in showing the necessary leadership to succeed in missions.

The Objection is the fastest firing weapon in the game, but does the least damage and travels at the least distance. The MX-R has the third fastest fire rate and, when upgraded, has the longest range than other DMRs when they are at base tier. This DMR has the worst handling, the second lowest damage and the longest reload time. Dahlia's pistol is the Executioner, and it does 32 body damage. It is tied in second with the P12K for having the longest range. It behaves much similarly to a DMR, but has the worst handling and the longest reload time of any other pistol. It has the second slowest fire rate, so its damage and range are the best thing about this weapon.

Dahlia can revive teammates from afar just like Saint and will not be in a vulnerable state while doing it.

Dahlia uses the Smoke Grenade to block fields of vision to revive her teammates or to change the play of the battlefield. As a combat medic, she uses the Grenade to clear out enemies to give her team the advantage.

Dahlia's key perks are Replenish, Lifeline and Tenacity. Replenish allows Dahlia to engage into another fight with a her clip reloaded instantly for additional support fire (MX-R) or to provide pressure fire (Objection). Lifeline can get allies back up as quickly as they got down. This combines well with Dahlia's link ability because then, her allies would get back in the fight with their health back before they know it. Tenacity allows to Anvil take less damage from explosives, so he'll have a better chance of staying alive more than others.

Dahlia is a Rogue with a special privilege to where she can be played on attack or on defense. She can attack from close range, using the Objection, or from a further range, using the MX-R. Dahlia can get allies back up as quickly as they got down and survive explosive attacks, allowing her to stay on her feet to support her teammates. Due to her being a combat medic, Replenish goes well with the Objection, as the ammo runs out quickly because of its fire rate. 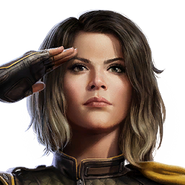 Dahlia has three kunais sheathed on her left leg, but they are never used in game.