"One of the first Rogues, Anvil is a career soldier who's tough as nails."
— In-game Description

Anvil is a playable Rogue featured in Rogue Company.

Anvil is a Defender, a Rogue Company member that focuses on securing objective locations and slowing the enemy advance. Anvil comes equipped with a barricade has the use of being a wall and he is immune to disorient and blind effects.

Veteran of a hundred battles, Anvil brings stability and security to any mission. He has seen it all. He finds success on the battlefield being more heavily armed and heavily armored than anyone else in the fight. Anvil was one of the first recruited Rogues in Rogue Company.

Anvil shows himself to be a leader that is also judging, grateful, and encouraging towards others. As a leader, Anvil always identifies all priorities and tells his teammates what needs to be done. Anvil judges his enemies when they lose against him, declaring that their inexperienced methods are easily noticeable. But Anvil even at times demands them to try again, even if they are "inexperienced". When revived, Anvil shows gratitude for those that help keep him alive. When reviving, Anvil motivates his teammates, telling them to ignore the pain and continue the fight.

Anvil is equipped with a shotgun and a light machine gun. The Arbitrator is the most damaging shotgun and can down an enemy with 1 headshot or 2 body shots. Arbitrator mag size has only 2 bullets and does not have an upgrade that allows for additional bullets. This is because it is a double barrel shotgun. It also has a slow reload time, which makes it important that the gun is upgraded for a faster reload.

The MLX Maw has a fast fire rate and does 16 damage to the body and 24 to the head, meaning it will take a maximum of 7 body shots and a minimum of 5 headshots to down an enemy. Its magazine can go from 60 to 90 if upgraded, making it larger than the largest magazine in the game, which is itself. The MLX Maw has the longest reload time in the game with the time of 4 seconds. It does not have an upgrade for a shorter reload time and Anvil does not have the Nimble Hands perk, so Anvil must be cautious in certain situations when reloading this weapon.

The Executioner does 30 body damage and it behaves much similarly to a DMR. The Executioner has the worst handling and the longest reload time of any other pistol. It has the second slowest fire rate but still manages to succeed in close or mid ranged distances.

Anvil's Barricade is very durable and has 1200 health. It is used for blocking paths, covering objectives, or even to use as cover out in the open. Strategically, Anvil can place the shield down in front of the bomb to defuse it while enemies are forced to make a move. The Shredder Rounds perk does twice as much damage damage to Anvil's Barricade. This means that instead of 1200 health, only to those that equip this perk will only need to exert 600 damage to the Barricade. Flash Bangs and Tear Gas Grenades do not affect Anvil, so Anvil will never have any visual deficiency.

In Anvil's case, the C4 is best used for enemies that tend to make an approach. The Active Protective System has good use, especially when Anvil is defusing the bomb behind the Barricade. While enemies use gadgets to stop him, they will be destroyed, which will force the enemy to make an aggressive attack.

Anvil's key perks are Headstrong, Life Drain and Tenacity. These perks increases Anvil's survivability. It will be much harder to take Anvil down.

Anvil has perks that makes him durable during fights and will increase his survivability chances. The MLX Maw carries a large amount of ammunition and the Arbitrator delivers devastating damage towards enemies.

Anvil's weapons take a long time to reload and this leaves him at a disadvantage because he does not have the Nimble Hands perk.

Anvil's plays as tank on his team, allowing him to soak up more damage than others. He defends from a close or medium distance with high-powered weapons and makes use of gadgets that are used for significant defenses. 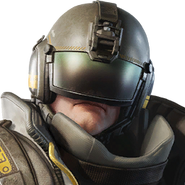